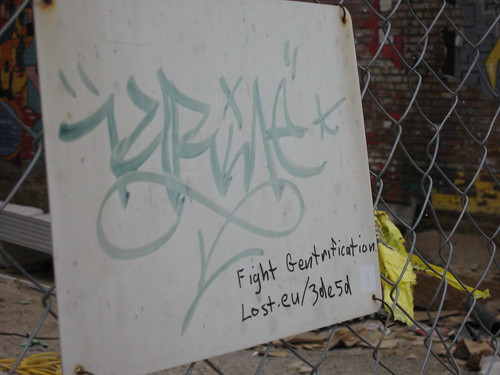 I had to put my iPod out to pasture this morning. Something was up with it, it refused to add new songs claiming there was no space, it also refused to remove old songs so that I could add the new songs. Thankfully there was no content on it that wasn’t on my computer, so the only thing I lost was a little time after performing a “Restore” on it. I pondered leaving the house without it, but then realized that I was thinking crazy thoughts and without the white earbuds, random people on the metro might feel free to just strike up conversation. Considering that I had a mother of a hangover this morning, I didn’t think that would be such a good idea.

Yesterday at work was very much the usual, I finally brought in my iPod speakers because I hate having headphones on and being totally cut off from sound in the office. There were many loud conversations, and a few mega-congregations right behind my desk so the upcoming happy hour that evening was extremely welcome by the time I left for the day. I got home, decided to buck my usual trend and wore shorts instead of jeans. I knew it would be hot and my shorts matched my shoes, so I was still fashionable. I couldn’t find a long-sleeved shirt that looked good untucked, so it was a tucked night. A little duct tape, hairspray and Preparation H and I was out the door!

I met Gregory at Merkado where we had our usual nachos and after my first margarita I decided to try a St. Bart’s Tea, a blend of 4 rums and pineapple juice. Holy crap, that drink really needs to be sold for more than $5, it’s lethal! From there we headed along to Halo where Victor was happy to see me and we tried a few new drinks over there, a hangar one kaffir lime cosmo, a pear-tini with grey goose pear and amaretto, and then a zen pear with the grey goose pear and zen green tea liqueur. While there we made some new acquaintances and one of them, Bradd with two D’s, decided he wanted to head someplace else and suggested Remington’s. Since I knew Michael was headed that way I texted ahead and warned him of our imminent arrival. We weren’t there very long before Bradd decided the scene was dead and he wanted to go somewhere else, so the three of us were caught up in wake and headed over to Green Lantern where I found out that shirtless men drink free – oh dear.

Somewhere near 11 we all regained our senses and realized we needed to beat feet to the metro so they wouldn’t get stranded in DC. I think we caught the last or next to last green line train to Greenbelt so our timing was excellent. I wasn’t so great when I woke up this morning but between sleepiness and the iPod issue I was only an hour behind my usual time getting in, and I’m pondering leaving just a wee bit early in the guise of getting a jump on the long weekend, but it’ll more likely be to get in a nap. It’s really lovely outside and I wish I had a yard or a deck or something. I’d totally take a nap on the grass or in a hammock, but I’d probably fry my skin in the process.

* I didn’t realize that the “Fight Gentrification” pic above actually contained a link/invite to LOST, an interesting web game. I don’t think I have the time to get involved and play but it looks like fun.