Does this make me ‘one of them’ now? 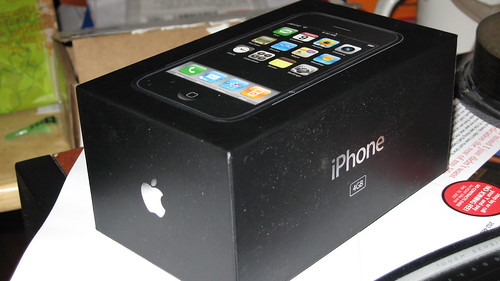 Yeah, I drank the Kool-Aid. Oooooh, a Jim Jones would be really good (and incapacitating) right now, but it’s nearly bedtime. My brother did come through nicely on sending me the phone, but he sent it overnight with USPS. He’s been away from DC long enough to learn that you really don’t want to work with DC postal workers unless you absolutely have to. They attempted delivery and I wasn’t home — who the hell is home before noon? So I called up to ask if there was somewhere I could pick it up today since I’m headed out of town tomorrow morning and would rather not wait until Monday to try picking it up. They kinda hemmed and hawed at first, but said that they’d have someone keep an eye out for it and call me when they found someone to redeliver. It was delivered this evening, and the guy that brought it made sure I knew it was no big deal, he had the greatest attitude telling me, “Hey, we’re the post office, deliveries are what we do.”

The activation process was really simple through iTunes, and because I’m a colossal geek, I was able to pull contacts off of my old phone via Bluetooth and import them into Outlook for easy sync. I saw a couple on the metro the other morning, they each had a phone in each hand doing the “transfer the contacts” game, but it was kinda cute that they were doing it together. I got an app to sync my Outlook and Google calendars, so I think I’m all set. Hopefully I’ll get incoming calls on the new phone within a day or two, and then I’ll start looking for the easy hacks n’ stuff for the phone. :nerd:

My dad was in Baltimore today for business, so he drove down for lunch and we ate at Georgia Brown’s. For some reason I was sure he’d been there before, but according to him, the only places we’ve been to eat in DC are the places I’ve taken him. He needs better clients. 😛

I just hope the weather keeps up tomorrow for the trip to consume mass quantities of shellfish!