I still feel a little full from last night’s dinner at Rasika with Michael, oy.

We figured that Halloween night would be a good night to grab a nice dinner out, unfortunately I came up with this idea when we’d just started in at happy hour at Cobalt and due to the events of the evening culminating in my losing my keys, I rather forgot about it until Sunday evening. I don’t really like sending out last minute invites, especially for something going down on what could be considered a holiday, so we decided that just the two of us would be fine. I’ve wanted to try Rasika for the longest time ever since I went to 701 Restaurant with Everett for Restaurant Week early last year [pics], but it never seemed to materialize. I guess I was a little hesitant as well as 701 was nice, but I wasn’t really overwhelmed with their food as I expect to be when going “out”. Rasika did have 3.5 out of 4 stars from Tom Sietsema at the Wash Post though, so it seemed like a good plan for combining Indian cuisine with a dining out experience.

A little iPhone love here, since I left my office knowing which metro stop to exit from, but not totally recalling where the restaurant was. Simply typing in ‘rasika’ gave me the easy map and directions from metro and as a side bonus, having my head buried in my phone allowed me to easily side-step the Greenpeace canvassers that seemed more aggressive than I’ve seen in a while.

I got to the restaurant a little bit before Michael, but they seated me and I ordered a Gin and Ginger martini from the bar. I don’t normally have gin martinis as they tend to knock me on my ass, but this sounded good: gin mixed with a house made ginger syrup and garnished with sticks of ginger, and I was not disappointed. Still, I took it slow on the drink lest it make me unable to enjoy the meal. In addition to my drink order, for the few minutes I was on my own, the server also asked me if it was my first time at the restaurant and also asked if I or my dining companion were on a time restraint to see a show at the theater next door, which I thought was very considerate and has probably saved their ass more than once.

When Michael arrived, the server went over the menu with us, explaining the house specials, the four (yes, four) tasting menus which included the pre-theater special for $28, one appetizer, one entree and dessert. After perusing the choices, we each decided to go with the special since it gave us a fairly good range of choices and cost-wise, it was a better deal.

I was impressed with each course, the chicken didn’t look terribly impressive at first, just pounded pieces rolled up and grilled, but upon cutting into a piece, I found it was extremely tender (a feat which I have yet to perfect) and very flavorful. Strong garlic, but not overwhelming, just the right tangy-creamy of the goat cheese along with a coriander sauce that provided just the right amount of brightness to temper the garlic. It was a good sized plate, too. It’s the kind of appetizer that a small-stomached person would enjoy on its own, or if you were having drinks in the bar, it would be a good item to share.

The lamb was served in a manner I’m pretty much used to with Indian cuisine: chunks of meat in a sauce. The saffron gave it a great golden color and I’m pretty unfamiliar with mace or cardamom in my dishes and when combined with lamb, something else I don’t often have, it came together very well. I am typically an over-condimenter and I didn’t think once to ask for any additional seasonings. The entrees arrived with servings of basmati rice, and a traditional naan as well as a laccha/mint paratha, a flatter and crispier bread that went very well with the sauce. 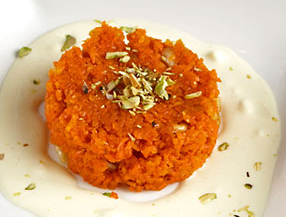 The biggest surprise was dessert and I’m generally not a dessert person. I rarely opt for the ice cream or sorbet, they were out of the second option, and the third offered was the carrot halwa. Even though she described it, I wasn’t really sure what it was, but figured I didn’t have to eat it if I didn’t like it. It’s a shredded carrot pudding, with cashews, golden raisins and sprinkled pistachio on top ringed with a sweet cinnamon cream sauce. It was incredible! I love carrots, but the most sweet thing I’ve ever done with them is steamed them and sprinkled a little cinnamon on top. This is a dessert that I’m going to have to try recreating at home.

I’d definitely go back for dinner again. I didn’t see if the bar area offered any happy hour specials, but it seemed to a good size for the area they were in. It didn’t get too crowded or loud while we ate, though the restaurant did fill up, they were even seating parties of 2 at tables meant for 4. I joke that I’m going to start bringing a tape measure with me when we go out and measuring the size of the plates against that of the table, but Rasika was smart enough to use rectangular and square plates that were able to use the available real estate without pushing off any utensils or drink glasses. I don’t have a ratings system (yet), but Rasika would score highly with me, the only area lacking is drink price, but I think that’s more or less a standard in DC now. Dinner $28, 2 drinks at $9 each: $46 before tax and tip. Definitely not your everyday eating out experience, but it would make a good date or splurge night every once in a while.

Thus marks my first entry for NaBloPoMo, hopefully this will encourage me not to break the chain!