Never have I wanted to be a Muppet… until now

It’s too early and too hot to think about too much, so I give you Anderson Cooper giving Grover a scalp massage, courtesy of Towleroad.

It was a good weekend. At times it felt busier than I wanted it to be, and at others it was dead slow and I wished I had some plans. Maybe I was just off-kilter from having more plans than usual during the week/end. Had a nice dinner at Asia Nine, had some drinks and laughs at Nellie’s and Sunday consisted mostly of sweating and drinking lots of iced tea and water. I really hope they turn on the building’s a/c soon. (this will be part of an ongoing series of whining about the heat until I have air conditioning) 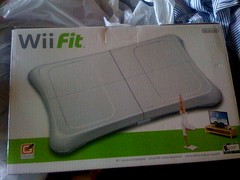 These boards are little ass kickers in disguise. Though truth be told, it wasn’t a board exercise that messed me up, it was the jogging/running “game”. I can still feel twinges of the cramp in my leg. Because of that I’ve mostly been focusing on the aerobics and balance games. I have to admit that my favorite is the Hula Hoop game which I believe is Nintendo’s version of Gaydar. Seriously, if your little boy loves the Hula Hoop aerobics game, he just might be a ‘mo. A few friends have asked that I put video of myself online, but I don’t think I can compete with this one, which is also the best marketing tool I have seen yet for a reason to buy the Wii Fit.