Heard last night, if Star Wars has taught us anything it’s: 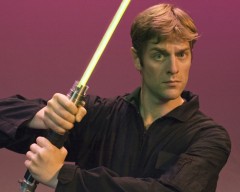 I lucked out and snagged Jhim’s +1 ticket to see One Man Star Wars last night at the Birchmere. I had no clue what to expect, but it was brilliant. Charles Ross does it all by himself, the opening theme and scrolling words, the characters, the sounds, even different mimes for various spaceships and the Death Star. His Luke was nearly as whiny as Hamill’s, his Han had the right swagger, his Yoda was… taller, but his Emperor was dead on.

The show was put on in the Birchmere’s dinner theater space, minus the Floridian senior citizens, and it worked really well for this show. We weren’t rushed to find a place to grab dinner somewhere else and then hit the theater. But it was all general admission, so in the future I’ll remember that the earlier we arrive, the better seats/tables. After a good meal and a few ciders, I have to admit that I ended up laughing so hard, it hurt, but it was so worth it. I’m not sure why he had just the one show in Alexandria, but fortune favors… me for being able to see it. He mentioned that he also does a One Man Lord of the Rings, so I may have to track that and hope he manages to make it back our way soon.

Today I am pleased to take a Snow Day and keep on top of things at home. I’ve been cleaning, checking e-mail, watching a little TV and geeking out prepping my Drobo. I looked outside this morning and saw cars sliding and people slipping, so I figured I’d be better off staying inside. I’m sure it’ll all be fine by tomorrow. Not quite the crippling snowstorm I was hoping we might get at least once this Winter, but it will do. 🙂