who wants a slow weekend, anyway? 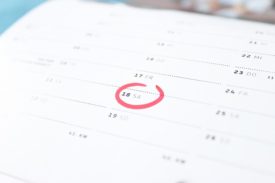 I’m so used to telling people on Monday that I didn’t do much over the weekend that I have to keep correcting myself, as it was pretty well packed.

Friday was the typical workday, a lot of stuff to get out the door while trying to enjoy the fact that its Friday. I did some shopping for dress shirts online, met Jenifer after work for dinner at Corduroy and then drinks at Halo and ran into Greg and his friend Butch, also saw my ex Joseph there and he had to stop by and ask the usual DC questions Where are you living now? & Where are you working now? – though in his case it was to ask “Are you still…?” because no Joseph, time has not passed and I have not changed since our mutual dumping. :p 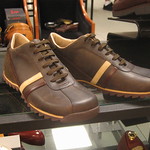 Saturday I enjoyed sleeping in instead of heading to the Farmer’s Market. I get spoiled having such easy access to two of them a week, one at home, one at work. Then got myself roused for the planned group shopping excursion. Partly to enjoy DC’s tax-free’ness and partly to go shopping. It was a bit of a hassle getting to the meeting place due to some unannounced events on 16th that caused some bus rerouting, but I eventually made it to meet up with Greg and Jenifer. We did a bit of shopping and Will, Richard and Mike caught up with us a little bit later. While we didn’t get to do much group shopping, we all did have lunch together and I got to introduce friends to other friends, which was really the point of getting them all together.

Unfortunately lunch at the Cheesecake Factory (surprisingly satisfying this time around) took much longer than expected (not surprising), so Jenifer was kind enough to give me a ride home as I had to get ready to go to a party with Michael out in Laurel at his friends’ house. That was a lot of fun as well, met some interesting people, got ogled by others. I came home with a number, business cards count right (?), but it seemed to be more of a “Oh here’s my card.” than the give me a call sometime thing. Plus he’s a smoker. Still it was a great time, though the house’s air conditioning couldn’t really keep up with the number of people in the house so we ended getting a little wilted as the evening progressed.

Sunday was a little more sleeping in, catching Friday’s Battlestar Galactica, which was just creepy .. some scenes made more so by the total absence of background noise or music. Finished that just in time to get cleaned up and set to go for bowling practice with Jenifer and Rob. My games were on a steady decline, I did manage a 177 on the first one, and the next two won’t be mentioned. It might be time for a new ball, or a heavier one, I’m not sure. 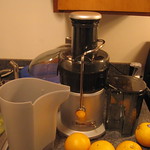 After bowling we hit Costco. I enjoy shopping there until it comes time to check out, however it was a very quick check out, barely time for me to go back to produce and grab a bag of oranges since somewhere in the hypnotic aisle of oversized snack food and gallon tubs of olive oil, I decided that I’d start seriously using my juicer.

I bought it a while ago for less than $100 on sale online somewhere, but it’s a big unit and hard to find counter space for. My cooking methods are usually a twisted dance of rotating in one machine after another when I’m too lazy to chop/grind/mix by hand. It’s much prettier than it looks on the panel of the box and after making some fresh OJ, I’m a little stunned by how much sugar there must be in store bought orange juice. Screwdrivers taste a hell of a lot better, too.

Dinner consisted of honey and mustard glazed chicken thighs with rice (spiced up with garlic) and I figured the juice would have to count as my fruit/veggie component since I didn’t have salad stuff, and wasn’t hungry enough for veggie saute as well.

No new Simpsons, Family Guy or American Dad so I got a little City of Heroes in, was on just in time to hear that Norman hit lvl 50 with his character and started his new epic archetype Crab Rangoon (the epic archetype aliens look like squids, so sushi nicknames have been a-plenty). The weekend finally caught up with me and I passed out around midnight. Yay Monday, Yay Work… *bah*