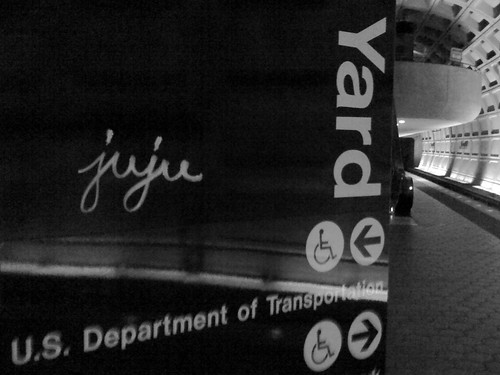 I’ve been told that juju is just a tagger around DC, but in my state of mind this seemed more serendipitous when I saw it in the station yesterday. I’d had a crappy day at the office and was looking forward to heading home for a quick pit stop and then back out to happy hour with some friends. If anything, I needed some good juju. 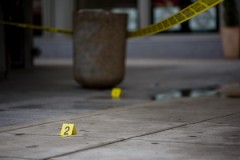 It’s hard to say whether it was good juju or just dumb luck, but when I got back home to Columbia Heights, I missed a shooting by mere seconds. I was kinda truckin’ out of the station when I heard–through my loud-ass headphones–two gunshots. I was just steps away from the escalator. People already ½-way up the escalator screamed and ducked down, but didn’t try running back down into the station. Eventually a WMATA employee came over and asked, “Was that what I think it was?” and directed people to use the other station exit. I sent a few updates to twitter and made my way home. I didn’t see who was shot or any ambulances, but there were plenty of police officers already speaking to people and witnesses. By the time I was a block or so away, I heard sirens.

I can’t even act all strong and tough about this. It shook the hell out of me. Mainly the thought that people were waiting to meet up later was what kept me from just losing myself in the couch and TV for a while at home. I got a few messages from friends asking if I was OK and I appreciate it. I know shootings are, unfortunately, commonplace in the District, but that is the closest I’ve come to possibly seeing a shooting. And as one of the people was a bystander, the closest I’ve been to possibly being in the line of fire. It’s not been a good year for the Columbia Heights area when it comes to crime, but the crimes taking place during the day seem to be getting more and more frequent.

Thankfully, the victims injuries were not thought to be life-threatening. Aside from 2 pieces of police tape still wrapped around lampposts, all signs of it were gone this morning. Life in the city goes on.