My addiction got the better of me yesterday and before I left the office, I looked up information on enabling tethering on my iPhone. It was one of the features announced, but not enabled, at the last big iPhone brouhaha. I was fine leaving it alone and waiting for it to be officially rolled out, but that was before being internet-less for 5 days. 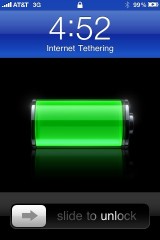 Turns out it was easier to enable than one would think. A developer created a site with the correct profile for iPhones to share their connection via USB or Bluetooth. No jailbreaking or install files via a connected PC/Mac required. It did take a bit of fiddling to get my MacBook to use the connection, but it recognized that a new network connection was available immediately. Before I could skeptically open up Firefox to try reaching Facebook, my weather application grabbed an information update and proved that I was really connected. A quick look at Network Preferences showed I’d been assigned an address via DHCP and all other details were filled in by the network.

I didn’t stay on for very long since it is an unofficial feature and some carriers have reported being able to track the tethering usage, but for applications outside a temporarily internet-less home, I could see this working quite well. One friend that is easily classified as a digital nomad mentioned that he uses tethering at least once a week. So I probably have nothing to worry about, though I’m guessing part of the delay is so that the carriers can determine a pricing structure for this type of data usage.

The speed wasn’t horrible. Above are the results of two speed tests I ran, a few minutes apart.

For checking Facebook, e-mail, twitter, managing photos on flickr, it wasn’t bad. I did have some trouble getting through to sites with Flash-based intros and the “Mad Men Yourself” generator that I used this morning stopped loading & hung at about 37%. But I was able to keep in touch with people. I mostly stuck to web-based applications and the response was respectable. Obviously it’s nowhere near the speeds of either DSL or Cable*, but enough to get the job done. I’m not about to try downloading high quality episodes of Psychoville, but for keeping tabs on my Mafia Wars family, it worked well. 😉

RCN did contact me via twitter and I responded via e-mail with a summary of yesterday morning’s blog entry. I got a call today from a nice representative who checked my account details and confirmed that I’m better off waiting on the service technician visit this afternoon. He did agree that a 5-day waiting time for a service call seemed out of the ordinary, but that was just his opinion, not the official party line. After speaking with him and having my account credited for the downtime, I appreciated the response, but it always bugs me when it takes a more aggressive/irate stance to get someone to respond that isn’t working from a script.

I hope they’re able to resolve my issue this evening, because it is getting to me. There are new tv shows that I’m missing! And poor iTunes whines at me every time it can’t connect to the iTunes Store. These poor little applications, they just can’t handle it when the internet is down. See, it’s them going crazy, not me. They told me so.

* For reference, my office’s speed is about 20 times the #2 result. Mmmm, dedicated T1.