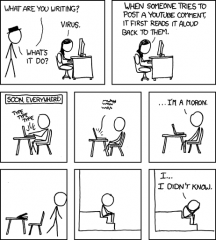 This should totally be made mandatory. Not too long ago the wonderfully geeky and hilarious webcomic xkcd had a character writing a virus that would force YouTube commenters to listen to their own comments read back to them. One hopes that this might cut down on the general state of the comment sections over there. I sent a copy of the comic to a co-worker and added that I wish I had something similar to install around the office for people’s e-mail. Like most of Randall’s comics, it was dead on and hilarious.

Well it turns out YouTube, as part of their mad efforts to add on everything they can think of to their interface, has now added the option for users to hear their words in text-to-speech. This Webmonkey article points out the best part, emphasis mine:

The placement of the button is interesting. It’s exactly where the post message button used to be, meaning quick commenters will discover it only when they accidentally click the new button. Hopefully they’ll do this with their speakers up at work.

I can’t recall the last time I posted a comment on YouTube, I think it was to compliment some dude on his opera singing. Generally I don’t read comments at all on any site except personal blogs. I was briefly a fan of the Firefox extension YouTube Comment Snob, but in the long run it’s much kinder to my sanity to avoid the comments altogether.