Not that this is really news, but I bought the new iPhone. I maintain, however, that it wasn’t really my fault! I was at home not feeling very well the day of the release and after I finally got out of bed, I noticed twitter was abuzz with people trying to get either online or in line to pre-order the new iPhone. I didn’t even realize that it was pre-order day, but I saw people saying they couldn’t get online and that the Apple store page was down, etc. so I tried it myself. Apple’s site was definitely hanging, but AT&T’s site seemed fine. I got through all the steps and had, like most people, been offered an inexplicable discounted upgrade. At that point, I figured I’d gotten that far and who knew when I’d get another chance, so I clicked buy. I blame the radiation as it clearly affected my brain. 😛 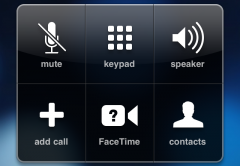 I already upgraded my previous phone to the new operating system, so was already loving it, but I wasn’t prepared for how cool the new phone looks. I didn’t watch the keynote, so I really wasn’t ready for the shiny-pretty goodness. I have, so far, refrained from licking it… so far. While I was waiting for launch day and that notification from FedEx*, I did look up all the stuff the new phone could do and what most intrigued me was FaceTime: iPhone to iPhone video chatting over WiFi. Then what most surprised me was how many articles were written with people saying how awesome the video chatting looked and how great it would be. Did these people not realize that video chatting was pretty much declared dead by the masses?

Don’t get me wrong, I love video chatting, when it was a standard piece of Yahoo Messenger, it was the best ever. One of my friends in the UK and I would leave each other video messages all the time, I ran a live webcam** on my old site, and while I wasn’t brave enough like these ChatRoulette*** people are these days, I didn’t think anything of chatting with someone and being willing to video chat with them after a few nights of conversation.

But after a while, even though webcams came down in price and even started to be embedded in laptops and bundled with computers, there seemed to be a distinct feeling of “No way!” Goodness forbid someone I know and see often will see what I look like when I’m at home! In fact most articles trashing video chat and now praising it again referenced the following scene from The Jetsons episode “The Space Car”:

After my first FaceTime chat, I found it fun again, but I’m kinda bummed that it’s not more open yet. Apple didn’t even make it able to work with iChat, and when most every household has a camera in at least one of their computers, restricting this to iPhone only seems silly. Still, it’s a good time and I hope that this gets more people to come around on the video chat thing. But even if it doesn’t happen on its own, there are apparently already iPhone 4 video sex chat lines hiring operators so the adult entertainment industry is poised to move along technology, as usual.

The main drawback of video chat today is that it just isn’t as cool as Sci-Fi or even those Cisco TelePresence ads. You’re often chatting while playing games or watching TV or dealing with who knows what other distractions, so what you mostly see is your friend looking down at the keyboard or off into the distance. The coolest aspects of FaceTime that come to mind can’t be done because you don’t have WiFi everywhere. But with Starbucks ponying up for free WiFi for all on July 1, expect there to be a lot more unnecessarily loud talkers in the coffee shop saying things like “Yeah! I can see you too, wow!”

And just in case you’ve got the new iPhone and have no one yet to chat with, Apple has a FaceTime call in number you can use to test out the feature: 1-888-FACETIME. I for one welcome back video chatting/conference as “in” again. But I suspect this will make me a little more aware of my appearance when I’m at home, at least until I get my morning mask.

* It seems like most people, while not intending to be haters, immediately ask if you did something crazy to get your new Apple device: camping out, standing in a long line, etc. The last thing I ever camped out for was a movie, I have my Apple devices delivered because I’m classy like that.

** Think clean thoughts, chum. It was all above board.

*** Even though ChatRoulette is known as a haven for penises–though perhaps not for long–the real chat roulette would be for your video camera to turn itself on at random times without your knowledge and broadcast that footage to the web.