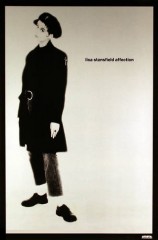 There are few artists that, no matter what they put out, I’ll buy it. I’m sure there’s a cultural term for this that isn’t quite “fandom” but something else… perhaps obscure fandom since many of the musical acts I’m devoted to are often one-hit wonders in the eyes of others. Chief among these is Swing Out Sister, but that’s for another day.

Today, April 11, is the birthday of Lisa Stansfield who was probably my introduction to British Blue-Eyed Soul* with her well-known single All Around The World. I heard it once or twice before heading off to college and one of the dance clubs I frequented would play other tracks from the album to warm up the dance floor as the place filled up. I rode the bus to the record store and grabbed a used copy of the CD**, then proceeded to play the hell out of it. I even talked the shop owner into giving me the album’s promotional poster hanging up in the store for my dorm room.***

Her later albums traversed a few different paths in the musical spectrum, pop, dance, r&b, even swing & jazz, but I admit that no album will ever hold that special spot in my memory like Affection. I’ve developed a theory that many people really cling to the music that they listened to when they started going out to clubs and/or bars, or for gays and lesbians when they started coming out, which explains why I’ll always love diva-driven, piano-backed house music and late 80s to early 90s tunes. Still, while I’m not sure if I can call Affection my coming out album, hearing Lisa sing, “…but I’m gonna find him…” certainly didn’t hurt.

So Happy Birthday Lisa! She doesn’t seem to have aged much in those 20 years, but as her last album was 7 years ago, she may have had enough of the spotlight. Still, get the right amount of drinks in me on karaoke night and I’ve been known to–attempt to–sing All Around The World for the crowd… just don’t get high hopes for my high notes.

* I’m not sure Rick Astley really counts. He had the chops, but stuck with Pop for his earlier releases.

** I don’t think that sentence would even make sense to anyone these days.

*** I attended an HBCU. Any prospective roommate seeing Lisa Stansfield looking down onto my desk should have probably known early on what was up–if you know what I mean…