A fun little post to round out the week and greet the holiday weekend. Teleworking yesterday, in between tasks and going to the gym1, my friend Steven posted the following image to Facebook:

Joan Crawford, Film Star and Member of the Board of Directors of Pepsi-Cola and Frito-Lay

“While other people eat dessert. I eat a dill pickle. I like things sour and I like to finish the meal with something like that. It’s better for me than a sweet, of course. My mouth only waters for a nice, juicy, kosher pickle.”

As someone who is both a Joan Crawford and kosher pickle lover, I immediately scrutinized the image because it’s just the kind of thing someone might fake up for a laugh. Admittedly, I’m a late in life Joan Crawford fan. My first exposure to her was Faye Dunaway’s over-the-top performance in “Mommie Dearest” and for a while I though Faye Dunaway was Joan Crawford. But after getting a proper education, I was set back on track.

And that line about the pickles? Turns out it’s probably not fake at all! From Joan Crawford’s own self-help/advice book “My Way Of Life” comes a tip on dieting:

“I never touch sweets. I’d much rather have a dill pickle–if I ever ate ice cream I’m sure I’d surround it with pickles. I did eat ice cream once. When I was a kid I used to run out at the first fresh snow and get cups, let it snow into the cups, then bring them in and eat the snow with sugar and cream on it. That was my ice cream. But now, no. I have no yearning for sweets.” 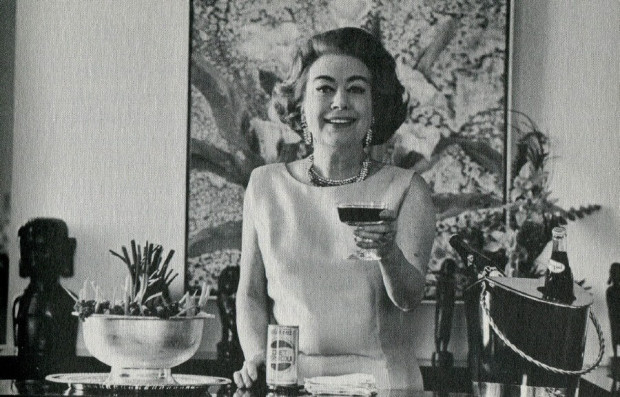 And an anecdote in renowned gossip columnist Liz Smith’s “Natural Blonde” recounts a time when Smith had been assigned to write a piece on what the stars–including Joan Crawford–liked for dessert. Something even she considered fluffy for the time.

…Crawford answered in tones that were a cross between Eleanora Duse and Mrs. Patrick Campbell. At the same time she dripped a bit of venom. “Why, Liz, dear, I didn’t find the question silly at all. Frankly, my idea of a perfect dessert is to suck on a great big dill pickle!”

I don’t have a huge sweet tooth, but I’m not sure I could give them up entirely. However, as a kid, I loved sipping the pickle brine from the jar, so maybe it’s time to put some “great big dill pickles” in the fridge. After all, they helped Joan keep her figure!

1 Yes, I’m going to the gym on a somewhat regular basis now. Try not to be too shocked.