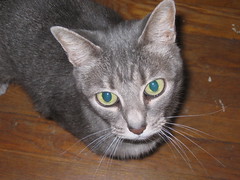 Go see pictures from Doug’s Game Day in which I am featured not once, but twice… or I’ll sink my claws into your pretty pretty flesh. (Which she’ll probably do either way) For some reason I really like the pictures taken of the boys playing scrabble. The lighting was just perfect in the room to make it look as if the game was so much more intense than it really was.

I had an odd dream last night.

Backstory: A few days ago, my father calls and says he needs crash space. He was planning to come to DC for a 100 Black Men of America conference, apparently they are meeting with the Congressional Black Caucus and these two entities combined, I like to call this new entity The Council of Blackness, totally overbooked hotels along with all the other protests and people who will be here this weekend. So he was planning to get in Thursday at some point, and crash on my couch (I wasn’t gonna make him sleep on the couch) and then leave Friday.

So last night in my dream, in which I was at a gayboi house party lasting all summer long while at the same time I was in a 3 month long (I think) golf tournament and various other things which will make themselves clear in time. Someone came running through the house with a phone saying something had happened to my father. I take the phone, and its my mother, identifying herself to me by her full name (weird), and she tells me that my father had died. I didn’t freak out at first, but was bawling after a little while and then her “story” didn’t quite add up so I began to suspect that he wasn’t really dead.

It was at this point that I was woken up by my cell phone ringing, my mother’s name coming up as the inbound call (yes, I was freaked out). Turns out it was just my father, calling from home to tell me that he wasn’t coming to DC as he’s got a bit of a head cold. I told him it was no big deal and to get some rest.