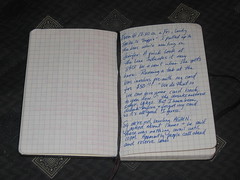 Jenifer said yesterday that when making plans in DC, you should expect the unexpected and she was right.

It was to be our hooky day, I went in and worked a 1/2 day, and even after 4 hours was in MUCH need of relaxation. Our plan was to go to Lucky Strike, bowl and then go see Harry Potter. I picked up discount tickets from the office (only $.50 off matinee prices, but savings is savings) and headed on over.

I got to the alley and the restaurant area was moderately full, the bar was empty, though someone did ask me if I was trying to get a game of pool going. The line at the bowling counter was pretty long, but it was mainly the shoe-wait delay from what I could tell. I headed to the bar to wait for Jenifer and ordered a screwdriver (I knew it would be overpriced, but I didn’t care), I asked the server to open a tab, something that often gets me into trouble, but at these prices I didn’t think I could go overboard. She served me a not-quite-full-glass cocktail, but it was still good, took my card and came back a minute or two later saying “What we do here is we authorize your card for $50 and then charge the appropriate amount when you sign out. It’s so I can give you back your card now.” I was shocked and appalled, and then I remembered leaving my card at Halo once and the pain in the ass it was to get it back, so I guess this isn’t all that bad of a thing, but wow $50!?!

Jenifer arrived and I ordered her a drink and we chatted for a bit before she decided to check on lane availability. I was finally starting to feel relaxed (the amazingly strong cocktail probably had a bit to do with it) and she came back with a most-certainly-not-relaxed look on her face. I asked what was up and her first words were something along the lines of “I hate this place”. The guy at the counter told her that there was nothing available until 10PM. People call ahead and reserve lanes (which I thought required paying the hourly fee) and then just show up. The guy told her “It’s the holidays, we have a lot of parties.” She countered, rather appropriately, with “So people can’t just walk in here and bowl, can they?” He insisted that wasn’t the case, but having seen it now on two occasions, we’re skeptical. I find it hard to believe that they don’t hold at least one or two lanes reservation-free for walk-ins, OR put a sign up at the front counter advertising the first free time slot to bowl. Not all people go out to bowl and decide that they’ll spend money on overpriced cocktails and food when they can’t.

So after finishing our drinks, we picked up the Potter tickets and went around the corner to Eat First to have lunch. Excellent meal, I had the Twice Cooked Roasted Pork and it was delicious with just a hint of spicy-hotness. We groused a bit about the bowling, but moved onto other things and enjoyed ourselves. After lunch we had plenty of time to kill so we stopped in at Urban Outfitters to look for potential gift items and all we walked out with were scarves for ourselves. Let this be a lesson, if you are on my gift giving list for the season, tell me what you want or would like early on, otherwise I walk into stores and continue to walk out with stuff for me and me alone. But it is a nice scarf. I twisted Jenifer’s arm to go to Häagen-Dazs for some ice cream before the movie, just looking for a good way to kill time. She had the Bailey’s ice cream “specialty” shake, and I had the Dulche du Leche. O. M. G. Both of them were so good, I just wish they served them in smaller sizes. I’m not a big ice cream person, I love milkshakes with cheeseburgers (so ’50s, I know), but on their own I can’t usually finish a large one. Still, it was a good way to bliss into the theater.

The only thing I jotted down in my journal after being in the theater and waiting through the credits and previews was “In true DC fashion, we are surrounded by burby yuppies and someone in the row ahead of us has a Sony PSP and is watching their own movie.”

When we first sat down there was one person in the theater, we weren’t EARLY, just about 15 mins before listed showtime, so “The Twenty” was playing. Eventually the place filled up, the latter group being the huge pack of yuppies who had the nerve to complain that they couldn’t all sit together. Yes, that happens when you can’t be bothered to show up on time or just a wee bit early.

Not too much to say about the movie as I didn’t read the book and I’m certain that anyone who wanted to has already seen it by now. I enjoyed it, there were a few spots where I wished we’d gotten to SEE what was being hinted at. Last night in an IM, Jhim said “Hey! Who won the World Quidditch Cup? And if it’s such a big deal, why can’t we watch a little of the match? And could you *show* us that Krum is the best Seeker in the world, rather than just saying it a lot?” – I agree. I also wanted to see more of the other competitors dragon trials. It was almost like there was assumed knowledge going into it, but still not much of a pay off, just move the film along, please, nothing to ponder here.

Oh yeah and there was a fire alarm right in the middle of the film. Thankfully they halted it and said it was a false alarm, but this now makes the second time I’ve seen a HP movie with Jenifer and it was interrupted by “fire.” So now I need to find a copy on the net to see the 10 or 15 mins I missed. I’m sure it made ALL the difference. And hm, even made up like that, Ralph Fiennes… yum.

Today I am insanely going out shopping for gifts and stuff, we’re going to head to the outlet stores at the Mills in Woodbridge. My mother finally e-mailed this morning with things she’d like and I’ll probably call others along the way to ask what kind of stuff to look for. I don’t have horrible taste when it comes to buying for family, but I’ve bought things before that they didn’t think they would enjoy upon opening the package and then a month or two later call to tell me how much they love it. But by then the snub has already set in. I do hope there’s wine in the house this year.

Off to face the day! Ta!