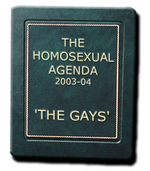 Do you know what it is? Do you want to know the real gay agenda, what 96.8 percent of all gay couples wish for every single day including Sunday? Here it is:

From what I can glean and above all else, the gay people of America seem to want this simply inexcusable level of boundless, unchecked normalcy. It’s true. For some reason, they believe the utterly disgusting idea that they should be able to live their lives in peace and trust and health, with full support and assistance from their schools and hospitals and government, just like everyone else. I know. Shudder.

It is, in fact, remarkably similar to what heteros want. And women. And black people. And immigrants. And dwarves…

The “adorably rabid” letters crack me up, the word honosexualiy gave me a good few minutes of chuckle and makes me want to pen a new word for the radical right’s fear, “Oh-No! Sexuality” which would seem to extend beyond just homosexuality woes.

Raine recently wrote about/copied this article in his journal discussing the double standard that exists in films and in society about how it seems perfectly okay for men to go gaga over two women getting it on (which you see a LOT of on screen), however for a woman (or gay/straight man too) to get good vibrations from watching two men going at it, let alone for that to happen on a movie screen is totally taboo. The comments on this article range from “well duh” to some pretty insightful views on gender roles.

<soapbox>
Personally I’m happy to see Brokeback is doing well, I don’t know if I’m going to see it or not, what with all the hype. I’m sitting back and waiting for some other good honest portrayals to come to the screen. Goodness forbid an american film studio produces racially diverse/color-blind casted movies, or we stop needing to have art house theaters to see great films about all sorts of people from all walks of life, not just movies that will appeal to the middle class demographic.
</soapbox>