My heart hasn’t exploded yet… 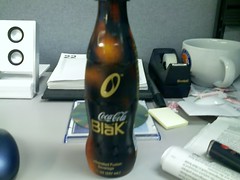 I saw the new Coca-Cola Blak in the building’s coffee shop today so I figured I’d go get one to try with my lunch.

It’s not bad, it’s about as sweet as Coke. There’s a coffee scent to it, but you definitely taste the familiar Coke first, then the coffee flavor hits your tongue like an afterthought. It feels a bit like Coke & Kahlua without the alcohol content.

I wouldn’t go out searching for it in a six pack, but it isn’t horrible. The store sold the 8oz bottle for $1.99, I’m not sure what it might go for in a grocery store, but that sounds about normal for what you’d be charged for it in a convenience store or like Subway or something.

One thing I do like is that the bottle is glass. Not sure if that will remain a design feature, nowhere on the bottle does it say “coffee.” It calls itself a “Carbonated Fusion Beverage” and the list of ingredients do list coffee extract along with HFCS, caffeine and oddly enough, aspertame. Perhaps that was used to keep the calories down as it weighs in at just 45 per serving (a quick comparison with the co-worker shows her ginger ale is twice that).

We’ll see how I feel in an hour, but right now I don’t think Starbucks should be worried at all, and I don’t see this lasting much longer than the Coke/New Coke/Coke II/Original Coke did. But hell, they not only brought back Tab, but turned it into an energy drink too, so just about anything’s possible.