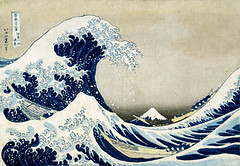 We went over to the Sackler Gallery to see the Hokusai exhibit which was amazing and huge. Locals should try to see it if possible, it runs through May 14.

That killed a good 45 mins and when we came back, co-workers still smelled the smell, which I can’t detect as well since I’m stuffly (stuffy+sniffly) today. Eventually someone from facilities came and took a look at it… only about an hour and a half after we called them.

I feel like I’m on my way out of the woods on the sick thing, more than anything I’m exhausted and dehydrated and still with not much of a desire to eat. I left about 1/2 my lunch and dinner on the plate yesterday which isn’t like me and I think maybe I had just the one meal a day over the weekend. Up shot is that I’ve lost about 7 or 8 pounds, but I think I wouldn’t mind just feeling hungry again.

Yesterday I was telling Jack what I hated the most about being sick, being alone. There’s the initial “I’m sick,” when you’re in pain and suffering and you really just need to rest and sleep and take care of yourself and it probably isn’t best for people to be around you. But there’s a point after that where you’re on the mend enough to do more than just lie in bed or on the couch watching tv all day and you crave interaction with people.

Sure when you make that first “I’m sick,” claim, you get the standard offers of “can I bring you some soup?” from people, and while that’s appreciated, in most cases it isn’t really necessary. What I really needed on say, Saturday evening or Sunday was someone asking “can I bring over a deck of cards and hang out?” I felt like I was imposing on people via IM just looking for conversation beyond, “What’s up?” To their credit a few people did check on me electronically to see how I was feeling but few of them were locals so I couldn’t ask if they wanted to hang out, plus I think that sounds like such a raw offer anyway “Hey you wanna come to my horribly messy sick apartment and hang with the sick boy? Fun, huh!?”

This isn’t meant to do a disservice to those people that chatted with me, hung out with me and generally put up with me over this past weekend. It’s just that I still felt horribly alone and isolated. Not even really “I’m single without a boyfriend” or “I don’t have anyone to take care of me” kinds of feelings. Anyway, it all boiled down to me feeling pretty crappy yesterday even though I was a bit better physically.