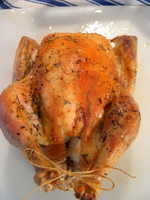 I’m attempting roast chicken tonight, this will be a first, but since Peapod didn’t seem to have any whole birds aside from game hens, I’ll swing by the store and pick up a smaller sized fowl since I’d rather not be eating chicken for days but I really want to break in my new pan and I haven’t cooked anything ambitious in a while, though from everything I’m reading, this could hardly be considered ambitious. I found the simplest recipe I could at first, then found Ina Garten’s that I’ve seen her prepare on TV (and may still have saved on TiVo) and while it looks to take a while, I think I can hold out until it’s fully cooked, especially with the liberal amounts of garlic it calls for. Maybe I’ll just skip out of work a tiny bit early to get a jump on heading to the store. Still if anyone has any suggestions for a good bird, feel free to pass them along to the front of the classroom.

I have passes for a screening of Wordplay tomorrow night, but my groceries are also being delivered in a time window that might cut too close to the screening time, so we’ll see how that plays out. Plus I’m rarely a movie theater person as it is, and this would make the 2nd movie this week, both somewhat documentary-ish… I wouldn’t know what to do with myself!