The best things in life… 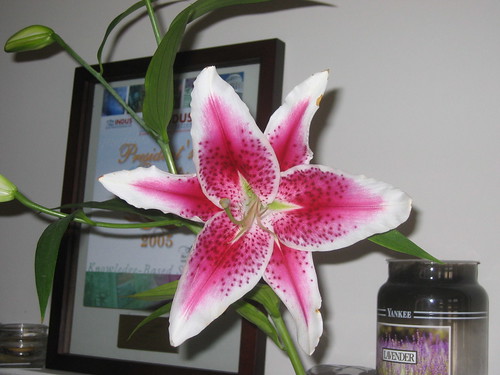 Best things about dating are the little things. I mentioned that my usual flower seller wasn’t out on the block like usual, likely due to the heat. So he comes out of the metro station, with Stargazer Lily in hand as he remembered me saying how much I liked them.

Sci-Fi channel sucks, but aside from the occasional Battlestar Galactica episode, on some holidays they run Old-School Twilight Zone marathons, like right now… and I could not be happier.

By Sunday I had already heard from all of my close friends asking me how the date went, there’s the most hilarious voicemail from Jhim and if I can find a way to record it to my computer via bluetooth or USB, I’ll post it, it’s great. It’s just good to know people care that much.

And it’s probably the cosmos talking but.. *wraps arm around ya* I love you, man!

And now… a word from my cynical side:

I know that sometimes I need to get off the soap box, but as Sci-Fi chan is on in the next room, I heard a commercial for their new reality show, and I couldn’t help but notice that “the likely gay guy” isn’t in any of the shots, or the group shots. Now this could be that some were added to the cast post-promo-production, but still… come on! I know Stan Lee’s got no problem with the gays, just listen to him talk about the Howling Commandos sometime.