Ok, Pet Shop Boys tickets are ordered. I thought I was done with concerts for a while, but it seems like the past year or two is my chance to catch people in concert that I couldn’t afford or reach the first few times around. Now that I have the resources, I’m going for it! And it should be a lot of fun, picked up a ticket for myself and Everett and even though it’s 2.5 months off, I’m already a little excited. 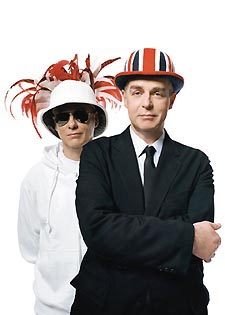 Got my geek on last night, Urban Pharaoh leveled to 35 with a good group of LJ chatters and I got a movie from Netflix–don’t laugh, Yu-Gi-Oh!: Capsule Monsters. I got into the cartoon mostly for the CCG aspect, and then discovered there was an actual story arc and the plot, while sidetracked occasionally by silly american dubbing, wasn’t too shabby. Capsule Monsters is kinda like Yu-Gi-Oh meets Pokémon, but still has good story elements.. and Alexander the Great! The DVD isn’t a movie so much as it’s just the first 5 or 6 episodes of the mini-series. It was fun, but I’m not about to suggest anyone else on my Netflix friends list rent it.

Tonight’s plans are banana bread, laundry sorting, goodwill bagging and sending some items back to Target that just didn’t fit as advertised. While I won’t dwell on it, I am starting to wish I were in slightly better shape to hit the beach, plus my birthday’s a few weeks after the vacation and I’d rather not spend it buying up a size. Besides, Restaurant Week is coming up soon, and I might have to set aside a few extra Table for One nights!