Ok, maybe it might be time to see what, if anything, Facebook really has to offer us. 23 invitations for various applications on the site. Enough, people! Thanks for thinking of me, and considering some of the invites, thinking of me as a hottie, but if you want my body and you think I’m sexy… just tell me.

I fear this may give rise to “facebook drama” where people get pissed that you ignored their invitations, or didn’t accept their virtual drinks or super wall scribblings or refused to let them “poke” you in all manner of ways.

With the snow outside, it is beginning to look a lot like Christmas. They predicted that it wouldn’t be all day and just a few inches, but it seems pretty bad outside. On the walk home I was getting pelted with what felt more like sleet than snow. I called off heading out to drink with a friend tonight, but find myself wishing I had something here to make a decent cocktail. But I ain’t going back out in that weather for love nor money. Not even something that is an intriguing combination of both. 😉 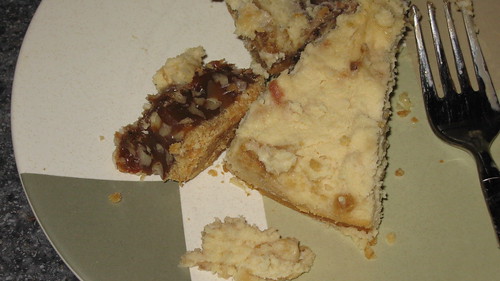 The cheesecake was not a rousing success, more like ½ of one. Though it’s rare, not all of my kitchen endeavors turn out well and this was one of those. The pecan pie layer seemed fine, but after the baking and chilling seems to have fused itself into a solid, rock-hard, candy-like mass that defies most all known methods of cutting and is certainly not to be bitten into. I’m wondering if I cooked the sugars too long beforehand, but as I only had the recipe to go by, I’ll have to do some research to see if that’s a common mistake in baking sugary pies. The cheesecake layer is yummy tho. Back to the drawing board!