There’s no whining in D&D!

It’s been ages since I’ve played D&D or similar with a regular group and my last experience in DC left a lot to be desired. Still this gave me a chuckle: 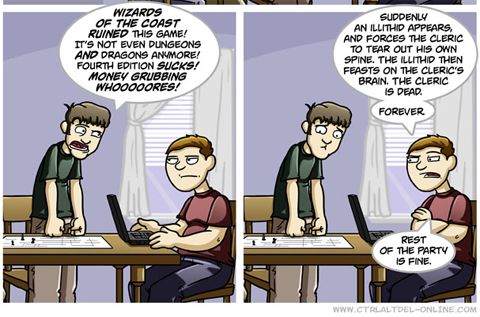 I haven’t picked up a D&D book in a long time, but the word around the net is the 4th edition changes up a lot of stuff and of course people aren’t happy with it — nerds don’t much care for change unless it’s upgrading technology. But it is nice to know that a good old fashioned GM beatdown still works.

* For the non-geeks out there, an Illithid is also known as a Mind Flayer. I realize that probably won’t help the non-geeks very much so here’s the wikipedia entry. For those too lazy to read: they control ur mind, u do whut they say, u be ded nao.