Just curious… to those artificial sweetener users out there: have you ever actually purchased a box, bag, etc. of the sweetener you prefer? Or are your stocks at home, office and in purse solely filled by grabbing–either a few extra or a gross amount of–packets from your local coffee place? This morning after getting my coffee*, I was pouring my usual amount of sweet into my latte and the woman next to me had actually formed the claw and was digging Equal out of the bin as if they’d just announced they were stopping production. And she didn’t appear to be a student or an Aspartame junkie.** 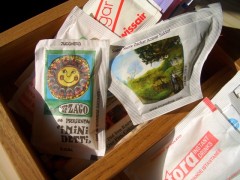 I’ve been guilty of the “I’ll just grab one more packet than I need.” when I’m not preparing my coffee in the shop, but this quickly made evident its futility and I started skipping the sweetener at the Starbucks knowing I had plenty in the office. And I’ve noticed this behavior doesn’t stop at sweetener packets. The office fridge’s shelves are full of extra butter/spread, jam/jelly, cream cheese, peanut butter and syrup packets. So much so that it’s hard to put actual food on some of the mini side-shelves. And their numbers keep increasing, they never get used!

Oddly, the one thing I don’t see are ketchup packets. Still, observing this behavior makes it hard to side with the entitled consumer when a restaurant decides to cut back on the freebies.

Also, is anyone else crying today? I don’t mean from an emotional, sometimes cathartic release… I’m more talking allergies. I thought my red-eyed-ness and tears were from lots of yawning, but now I wonder if I’m already being affected by overachieving pollen spores. 🙄

* While I’m trying not to rant and rave about DST, this morning the barista at Starbucks said, “Wow, you’re early today!” then stopped and said “No wait, it’s just dark.” Stupid DST.

** A former co-worker told me of his ex-girlfriend who, while in school, supplemented her artificial sweetener addiction solely from Starbucks locations.