“Man up!” What’s the phrase mean to you?

Strangely, I’ve been hearing it more and more lately, even from people I consider relatively enlightened*, and I wonder if it’s an indicator that the cultural gender-perception needle is swinging back in the other direction. For a while we didn’t mind if men took care of themselves, even if it was only to keep crafting that rugged look that looks like it took no effort at all, but was still very complicated. Has the age of the metrosexual shifted back to the retrosexual? Which most can’t decide if that term means you act and dress like either the traditional slobby-grunty-scratchy-man or whether you emulate Don Draper from Mad Men.

I saw the following ad while watching Mythbusters on Discovery Channel** and my reaction was very much WTF!?

There’s another ad where the customer is advised to “take off his skirt” to get a Miller Lite, clearly the only beer deemed manly enough by these ads from… Miller Lite. Both ads are nearly identical, though I haven’t seen the “skirt” ad yet, it probably airs on more manly channels like G4 and Spike.

And, if I may, let me take a moment to dissect the ads. If I go into any bar–gay or straight–order something and the bartender first asks me, “Do you care what it tastes like?” then tells me “Lose the [accessory by which I am non-secretly judging you] and I’ll give you a real drink…” I think I’ll go find another bar to drink in. I don’t care how hot he or she may be. I know that ads exist in their own little “commercial universe” but these encroach on The Bartender Hates You‘s territory.

So, Miller Lite, who broadcast a breakthrough ad named Switcharoo nationally in 2001 featuring a same-sex couple that was not the target of ridicule, and who proudly sponsors queer events around the world… is now saying that you better “man up” to drink their beer. But this is one of the most constant themes in modern beer commercials, most notably the Dos Equis “Most Interesting Man in the World” ads which claim that “he’d be in touch with his feminine side… if he had one.” The other ever-present theme is questioning the consumer’s worthiness to drink the beer being advertised. So while trying to sell you a product, they’re continually challenging whether or not you should be allowed to consume it–nice! And since these ads usually show women drinking beer as well, does that mean that all those ladies have “man’d up” as well?

Which brings me back to my annoyance with this phrase, even though most people use it to mean that the person should exemplify what society thinks of as good traits, fearlessness, responsibility, assertiveness–most people would never tell a woman to “man up” would they?*** It ties into our overwhelming obsession with gender roles, even within queer communities. It is no longer enough for gay men to say they’re gay and let their own personality define them. In addition to all of the subcultures we create, one of the traits most put out there is “masc or fem” to the point where “straight acting” became something to be proud of, while “no fems” was added to the standard “no fat[tie]s” in personal ads. As if we aren’t oppressed enough, we need to make sure that there are castes within our own communities so that there’s always a group able to look down on another one. Oddly enough, when one group is at odds with another, it’s usually the members of both groups that are looking down on the other.

Say what you mean, real life isn’t twitter–we aren’t going to run out of characters and you don’t have to punch up your phrases with clever words to replace what you really want to say. And if you’re stuck for the right words to express what you want, don’t resort to trite sayings and euphemisms–there are these things called books, libraries and the internet all of which contain plenty of ways both clinical and poetic to help you find ways to more aptly express yourself.

Of course, I could be interpreting this ad completely the wrong way and beer companies are just trying to target and shape a future market–hipsters. Letting them know that once they evolve past skinny jeans, vintage t-shirts with scarves, messenger bags and PBR that the “big boy” beers will be there waiting for them. Yep, that must be it. 🙄 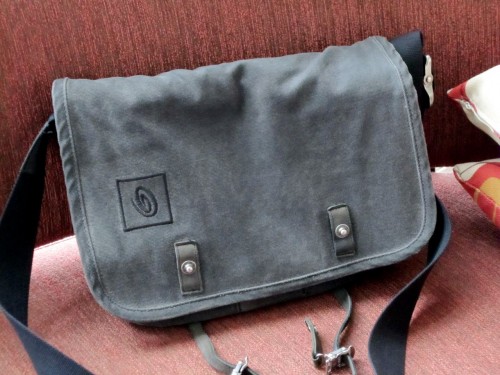 In the spirit of full disclosure, above is my man bag, carry all, satchel, purse, what have you****. It’s a Timbuk2 bag without all the bright colors and huge-ass’ness of their usual fare. And it accompanies me nearly everywhere after work and on the weekends. Honestly where the hell else am I supposed to put all my stuff?!

Don’t worry, I’m not going to lead us all in a rousing sing-along of “What It Feels Like For A Girl,” but I’m curious: what are some of your trite phrase pet peeves and why?

* However some of these people also casually use terms like “gay” and “retarded” as slurs. Just because no one calls you out on it, doesn’t mean that everything you say is OK.

** I wouldn’t normally consider Discovery Channel the haven for the masculine man, but it does seem that they’ve completely shifted their programming, of late, to a combination of blowing things up, survival, Ripley’s Believe it or Not and grizzled looking dudes doing jobs most of us wouldn’t touch with a 10-foot pole.†

*** With the possible exception of using certain marital aids, and honestly probably not even then.

**** Which is becoming another annoying staple of masculinity jokes in commercials. Seinfeld and Friends may have started the trend, but the constant meme of calling an man’s accessory a purse, which is quickly corrected by calling it a “man bag” is getting played out.

† This tweet from local Fox 5 DC anchor Brian Bolter cracked me up, “The way Ford dresses Mike Rowe [of Dirty Jobs fame] all down-home and folksy you almost forget he was a professional opera singer.”