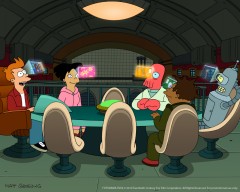 To paraphrase Fry from Futurama, “Did you know these iPhones are phones too?”

Today marks the 40th anniversary of the mobile phone. While I could reflect on how the device has changed over the years since it was invented, right now I’m more caught up on the fact that I’M AS OLD AS THE MOBILE PHONE. That doesn’t seem possible, though I do have a distinct memory of every iteration the phone has had leading up to our smartphones of today.

In 2012 a report carried out by the International Telecommunication Union found that there were six billion mobile phone subscriptions worldwide.

At the time the global population was seven billion.

To commemorate this auspicious anniversary, I could think of nothing more appropriate than Popsocks’ hit song “Mobile Phone” recently performed on It’s Kevin:

But seriously, it is kinda awesome to think about how this technology has evolved from something that kickstarted a new way of thinking about how we communicate, being free from wires and reachable anywhere–for better or worse–to starting to see technology as fashionable and sexy, mainly because we carry it around every day.

And 40 years on, I am proud to say that I use my smartphone every day… to take pictures, tweet and to stay up late obsessively playing Candy Crush Saga!

Maybe in another 40 years, I’ll actually be using it to make phone calls again.