I’m not as think as you drunk I am…

My new juicer arrived recently. It’s a Chef’n, and I am totally in love with it. I don’t go gaga over all their gadgets because I tend to think that any idiot can chop herbs or peel garlic, but I’ve been without a citrus juicer for a very long time and as someone that really enjoys making homemade lemonade and salsa, I’ve had to jimmy up a workaround which worked, but wasn’t terribly efficient in getting every last bit of juice from the fruit. But this thing is amazing, it’s called the Chef’n Juicester, it has two different juicing heads for larger or smaller fruit and it filters out the pulp and seeds, juicing into a cup with measurements (cups, ounces, millimeters, tablespoons and teaspoons).

To put it simply, I reamed the HELL out of some limes. Yes, I am fully aware how nasty that sounds, I think we’ve all seen scenes with watermelons in our time (ok maybe not ALL of us) so let’s just move on and speak no more of it. The product totally delivers on the goods, and will be a frequently used gadget in my kitchen.

I also broke some dishes out of storage, I found these while shopping with.. Moose I think, at Linens and Things they were on clearance at $5 for the set and I think I got a serious deal on them. 4 stemless stubby martini suitable glasses and a pitcher with stirrer. I dunno about y’all, but I think martini glasses are in themselves, sobriety and balance tests. Just try getting back to your seat from the bar/kitchen without spilling any of it and you’ll know what I mean. Stemless are a little easier, but if you fill it all the way you’re still screwed.

Anyway, so what am I to do.. new juicer.. “new” glasses and pitcher… It’s obvious, COSMOS! So I headed to Giant after work and picked up some limes and cranberry juice, then to the liquor store around the corner at which it took the woman in there (not the usual employee) ages of staring RIGHT AT the Triple Sec bottle to realize that yes, indeed, they DID have a large sized bottle of Triple Sec available to sell me. 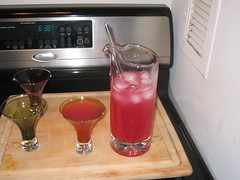 Normally I’d do Cointreau, but for a mixed cocktail like this I decided being a snob wasn’t “in” this Tuesday. They turned out very well, in fact I’m going to have to either guzzle the rest or put it on ice for tomorrow night because a single “recipe” makes a heck of a lot! (1 cup vodka, 1/2 cup each cranberry juice and triple sec, and 1/4 cup fresh lime juice, about 2 limes – which makes ALL the difference)

I’m not a lush really. I’m simply a connoisseur of fresh ingredients… with alcohol in them. Yeah, that’s it. Beyond playing with potent potables I also made a nice bit of pasta and sauce for dinner and Francesco Rinaldi’s pasta sauce has way too much sugar in it, I won’t be buying that again, I don’t care about the sale price, *blegh!*