So I bought a bunch of wings for the Superbowl, I figured I might watch it or not, but at least I’d have an appropriate snack either way. Since that day was in the 50s, I was out all day and by the time I got home all I was thinking was EAT DINNER NOW and had lamb leftovers. I didn’t even watch the game or the commercials, but thanks to Hulu I’m finally catching the ads.

But now it’s a few days later, I don’t like moving things to the freezer after a few days in the fridge, so it was wing time! The first batch, I turned out using AB’s Buffalo Wings Recipe, no sauce. Like most of his recipes, it’s good, but not necessarily easy. Though I still call it quick because the actual work steps are simple, there’s just that “hour” in the fridge while the wings drip more fat and dry off. This isn’t a spur of the moment meal, but when I think about the horrendous delivery times–and delivery fees–of the local restaurants, it’s comparable and much cheaper.

I usually just toss the semi-cooked pieces in seasoning before baking and it’s all good, but I wanted to try something a little different and maybe more “Superbowl’y” so I modified the sauce part of the recipe: chipotle tobasco, lime juice and butter. I tossed the wings in it straight from the fridge, the sauce sort of congealed and stuck to them and I popped them in the oven… 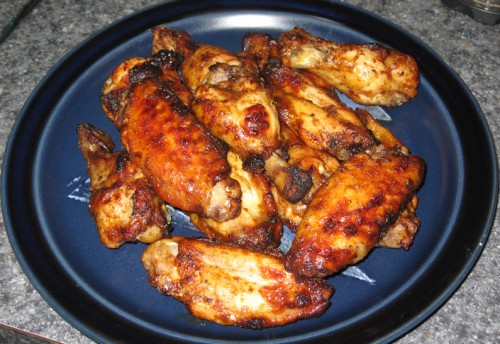 RESULT! I’m not usually a hot sauce kinda guy, but my lips were happily buzzing from the smoked jalapeno.

I basted them a little more when I flipped them and coated in a butter-based hot sauce, they aren’t as healthy as when I just bake them with simple seasoning, but I’ll work on that for next time. I also have yet to try brining the wings ahead of time, but that can wait for another future experiment. The ultimate result would be some make-ahead wings that I can freeze and then bake on demand since roughly 2 hours to make these things isn’t bad, but it ain’t great either.