who needs words when I have webcomics? 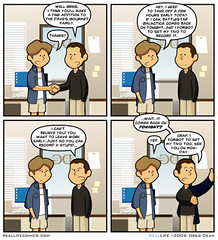 Ah Friday, the payoff day for most webcomics. Today’s Real Life (in which the character is just starting a new job) shows that geeks are indeed, everywhere. But silly comic character, you can set your TiVo from the internet, duh! I don’t necessarily know if I’ll be planted in front of my tv tonight watching Battlestar Galactica either, but I know that at the very least I’ll be watching it Saturday morning… after midnight = morning, right? And Diesel Sweeties sets up a great joke in an odd way, but I’m sure we’ve all encountered the same thing when we find others that share our likes and hobbies — “I finally find people like me, and they wind up being jerks.”

I’m looking forward to a relatively quiet weekend at home, I’m low on funds and my place is a disaster area and I did spy a recipe for a crunchy pear cheesecake that just may *have* to be baked, I have no choice, the recipes… they TALK to me.

And no one warned me that when the head is absolutely clean shaven, while it may look hot and sexy and all… it ITCHES when it comes back in, sheesh! I have never paid more attention to my hair and scalp than I have these past few weeks. It’s grown in a little bit now and I’m trying to decide if I’m going to shave it off again. Maybe I’ll wait for a special occasion, a swim meet to reduce drag or something like that. 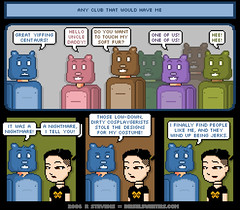 In the “What, Again This Year?” department — Birthdays. Last year the spouse of a friend threw a party and didn’t invite me. This actually didn’t bother me initially as some people put together small gatherings, some find it impossible to invite everyone they might like and sometimes some people just get left out. Now I still remembered the date and sent him an e-card because I didn’t make it to the store and post office in time and he sent a thank you. What started to annoy me was that someone else invited to the party asked if they’d see me there and I was all, “What party?” I had been invited elsewhere on that day, so it shouldn’t have been a huge deal, but it was. It made me pull back from trying to make nice with him even more than I already had and I have no idea if that caused any friction at home, but I doubt it.

But as the song says, “People are people…” And in accordance with my desire for no drama this year, I’m fully prepared to own what I say here and say that this is my particular take on things. I’m (mostly) not a mind-reader, and I can’t see through walls, so I have no idea what’s going on in other houses and heads. As I said during an argument with my father, “No one can tell you what to say and how to act, but they can damn sure tell you how what you say and do makes them feel.”

I’m sure the weekend will bring much City of Heroes playing between me kicking myself to be responsible and clean my place up. I’ve mentioned potlucks and cheesecake parties to far too many people now and they might actually be expecting me to make good on my promise at some time in the near or not-so-near future. But the three online supergroups I’m in make it hard to pull away! 🙁