I feel like I overindulged this weekend, on many things, and it feels good.

Friday was a beast of a day at the office, there’s a high profile site that has to be up today and all the content and edits are flooding in at the near-to-last minute so I was more than a little stressed when it was time to head home. I met Jenifer (

Saturday morning I got up early to expect the Peapod grocery delivery and while I waited, I watched the previous night’s Battlestar Galactica (Cain and Adama are both punk-ass bitches!). I headed downtown to Touchstone Gallery to see Jenifer in a staged reading of “Sappho in Love” by Carolyn Gage. 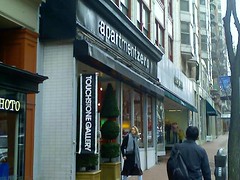 I got there a little early and decided to do something I rarely do, I stopped in a Starbucks, got a drink and just sat, watching the world go by. It was more fun people-watching inside the place than out of the windows, and in my mind I was picking out people that were likely in the area to see the reading (I was about 80% right), I caught Jhim as he was walking past to meet me and we saw Rob at the corner and walked in with him.

The gallery is very cool, some interesting pieces in there, all well outside my price range. Well probably not, just outside my desired price for art at this time. The play was great, very funny, a little bit long, and with more blocking than I expected for a staged reading, but it was also a directed staged reading. The actresses were fabulous, definitely more than you’d expect for a reading, some messages in the text really hit home and I laughed a lot more than I thought I would. It was time well-spent… just a lot of time.

After the reading, Jhim and I were wandering up to Chinatown looking for a place to have dinner and he saw a bus shelter advertisement for Fogo de Chão. I had never heard of the place, though I have heard of the concept of a Brazilian Steakhouse but I’ve never actually been to a place where Gaúcho chefs actually bring meat around to the tables on skewers. 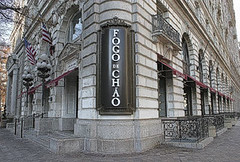 It was a wonderful time, the place is VERY accessible, we were hardly dressed for a night on the town (without a reservation) and the staff didn’t flinch. We got there before the dining room was ready so we had a few drinks in the bar before heading to our table.

It’s a very simple process for dinner, it’s all you can eat. You’re invited to the salad bar first, which is huge, I wish I had my camera with me as the cameraphone pics didn’t turn out quite so well. It’s dangerous though because it’s too easy to fill up on salad. When you’re ready for the meat course, you have a little card on your table, red on one side, green on the other. When it’s green, the Gaúchos come around with meat and more meat, telling you what it is and you can decline anything at any time. Flip the card over to red and they pass by your table while you eat what you’ve got or take a break. We also were served side dishes of warm cheese bread, fried bananas, crispy hot polenta and seasoned mashed potatoes, basically, get yer starch on!

I was impressed by how well the staff worked together, we were seated by one server who told us how things worked and then another took our wine order, yet another helped clear our plates and brought our sides, and we were asked repeatedly by staff how things were and if there were any cuts of meat that we hadn’t tried that we’d like. We did make a few requests and they appeared at our table within minutes. I must admit I lost count of just how many different things I tried though I can attribute some of that to the wine. We had a Cab-Sangiovese, I think (looking at the fuzzy camera phone pic) it was Sienna by Ferrari-Carano, but I’m not sure. It turned out to be a good pick and they had proper wine glasses so there was much swirling to be done. Jhim, as it turns out, is a compulsive wine swirler.

After his flan and my 7-layer chocolate mousse cake, we were both stuffed and lazy and happy. The bill wasn’t all that shocking, especially with wine and dessert too, but this is definitely a once every month or two treat, not your every day meal. I was totally pleased with the experience and look forward to going again with friends.

We headed back to Jhim’s car and watched it snow for a bit, while we were trying to figure out what to do. It was MAL weekend after all. After calling a few people, we parked at the Green Lantern and headed in for a few drinks and hopefully some man candy. It was the usual GL crowd, somewhat low-key with loud music, very smoky (I am so Halo-spoiled). We ran into some people we knew through mutual friends and found out that friends were headed to Blowoff that evening, so I texted around and found another friend was headed there too. I think a combination of the tone of one of the text messages plus the thought, hm, I wonder why they didn’t ask us if we’d like to go too sort of soured me on going there. Which kinda sucks, because in the aftermath, it seems like having a good supply of friends there wouldn’t have exactly been a bad thing.

Still at this point in the evening it was fairly early and I think we blew our wad on energy. We’d have been better off heading right home after dinner and trying to find something to do much later that evening. Still it was a fun day and I think part of me is still feeling that meal.

Sunday morning was as it should be, lazy. I got online and chatted with Richard (

Jenifer, Michael and I had dinner plans at 701 Sunday evening and unfortunately I awoke to Michael’s call of having to cancel. Winter hasn’t been kind to him between colds and asthma, so hopefully he’s getting some strong antibiotics. I had a chat with Al up in Rhode Island while I was getting clothes together to wear. I went totally yuppie, had the bluetooth headset on while ironing and moving about the apartment, I even kept it on to go down to Jenifer’s car and when I got in, she didn’t realize that I wasn’t talking to her. I figured it was like Joan of Arc, “No I’m not talking to you, I’m talking to God, duh.” 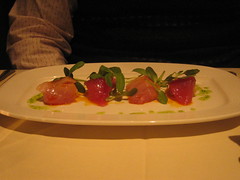 Dinner was… good, but not great considering the restaurant’s reputation. Pictures of our dishes are on my flickr account. I had a diver scallop over corn and asparagus risotto, that made for an odd combination of flavors, it was clearly the asparagus in the dish that was turning me off, it made it taste too… vegetable-ish for lack of a better term. For my main course, I had veal over cous-cous and shrimp with spiced butternut squash. This was better, but again it was hard to pin down a theme for the flavors in the dish, and the portion size seemed very Nouvelle Cuisine focusing more on the presentation than the content (hm, kinda like some gay men — *zing!*). It’s not the kind of place I would bring a date or friends for a group dinner, though their vodka bar was impressive, so it seems like it would be good for cocktails. Unfortunately, the apparent dress code makes it less accessible than I’d like, so it’s more for an after-work happy hour… on a non-Friday.

I got a note earlier in the week that repairs were being done to a unit on Monday and the building’s water would be out. It’s an old building, so I’m used to it, I just wish they’d picked a better day than one that a good number of people would be off work and home hoping to do the simplest of things like laundry or shower… or flush the toilet. Jenifer and I got together to bake a cheesecake, peanut butter chocolate chip to be precise. And she’d stopped by the liquor store to pick up our favorite vodka and mixers. The recipe with pictures to follow is coming later as I left my camera at her place. I also got introduced to Muppet Party Cruise for the Playstation 2, a fun game, clearly able to hold the attention of 2 drunken 30-somethings for an afternoon while waiting for baking to finish.

After that was the much more boring evening of coming down from the weekend, getting things ready for the work week and playing a bit more City of Heroes. Apparently they’ve put out a patch with some new treats in it, so I look forward to seeing how that goes perhaps tonight or tomorrow while I do laundry.

Damn, outta stuff to write. This means I actually have to work now!