I’m having a “Falling Down” kinda morning

I am still waiting for it to be a good day. Not that I have much faith in a Monday morning at work, but ya gotta try. I felt exhausted all day yesterday and nothing seemed able to give me a boost towards getting into the day, not even pure laziness and sloth.

I went to Tonic for breakfast and I think my usual/favorite server must have gotten a new job or be on vacation. My last two times there, I was served by very “cute” girl servers that were kinda… bad. Yesterday was the worse of my two experiences though as I was seated, order taken, cups filled once and from them on, I didn’t see my server again. No refills on coffee or water, no “how is everything?”, nada. I sat for a good 20 minutes after I was finished with the meal before she came over and said “can I get you anything else?” I admit that I did not tip well, and considering the amount of attention she paid to me, she probably thinks I’m an asshole for doing so. But this is one reason that I hate eating alone: you often get horrible service. Tables of 4 and 6 that were seated after me were getting more service and attention–and actual coffee refills. I wasn’t hungover or anything, but still you don’t nurse 8 ounces of coffee for an entire meal, sheesh.

After breakfast I headed home to find out that our building is now completely elevator-less. We normally have 2 working, if slightly glitchy, elevators so when one goes down it’s not the end of the world. But one had been down for at least a week with no acknowledgment from the condo board and the remaining working elevator was the more glitchy of the two. The doors hold open longer than normal, sometimes refusing to close at all on some floors. If you didn’t have experience with the car, you’d have thought it was broken. Well… now it is. When I tried to leave for breakfast, the car was just traveling to the called floor and then returning to the lobby without opening the doors. When I got back from breakfast, it wasn’t moving at all, and as I walked up the 7 flights of stairs to my apartment, I noticed that every single floor’s elevator call buttons were lit up. This morning, they were still lit up and the one on my floor was fairly hot to the touch. And still we’ve had no e-mails or posted notice from the condo board. I won’t go so far as to say they suck but… right now their level of response does.

My co-worker has remarked, “it’s always something with your building” and last night I had a dream that I was house hunting. Though with the prices I was being quoted, it clearly wasn’t hunting in DC. And I love my apartment, but the building is very frustrating. For instance, we still don’t have trash chutes and have to take our trash downstairs and out back ourselves. With working elevators this is a minor annoyance, with none it’s a pain in the ass. 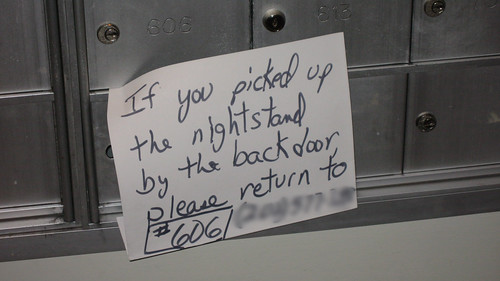 As a little bonus this morning after walking down stairs to head out to work, this sign was taped to our mailboxes in the lobby. The nightstand in question, as well as a futon frame & mattress, were in the basement hallway all day Sunday with no one around, no notes attached to them, nothing. The basement hallway is the building’s generally accepted, “you want it, you take it” area, so it’s no surprise that someone took the nightstand. For a while I considered taking it, but couldn’t see a place it would go well in my apartment and I wasn’t willing to carry it upstairs without an elevator.

I accept that it was probably a move that got derailed with a non-functioning elevator. But at least let people know that’s what you’re up to, so when they see a massive amount of abandoned junk in the basement, they don’t think there’s just some jerk-ass resident too lazy to haul away their own junk.

And the Starbucks was out of vanilla syrup this morning so I’m having a plain latte. Hmph! What is the world coming to!? 😛