Since getting back to writing on a more regular basis, it’s been a while since I shared a recipe, hasn’t it? Recently, I was informed that Chobani is engaging in a #madewithchobani social media campaign showcasing ideas for using Chobani Greek yogurt as a perhaps-not-previously-thought-of healthier substitute in dishes. 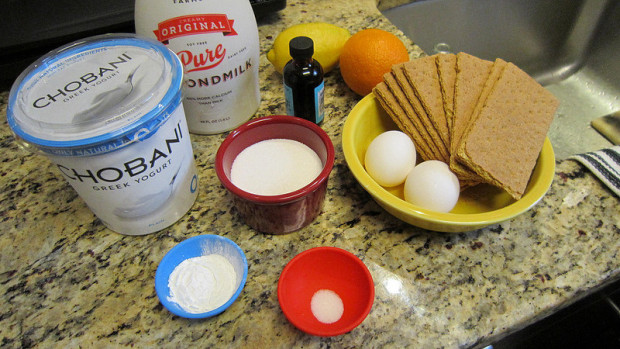 I immediately knew I’d want to try making a cheesecake. I still love my full-fat/full-sugar desserts, but having healthier alternatives up my sleeve never hurts. A little research around the web and in my cookbooks turned up cheesecake recipes that use yogurt, but it took a bit longer to find some that left out the cream cheese–the main culprit for calories…

A great recipe follows, and it has the added bonus of being able to make both parts with a food processor, or the cheesecake filling with a blender. No need to get out the mixer, and if you want to burn a few extra calories with some elbow grease, you could also mix it up by hand in a large bowl!

Swap out the cream cheese for greek yogurt in this fast and easy “mock” cheesecake recipe!

The result should be sticky enough to press and mold into a springform pan. I found the above wasn’t quite enough crackers, so I added 4 more sheets and another 2-3 tbsp of almond milk. This resulted in a wetter “dough” that was easier to shape into the pan with my fingers. The crust shouldn’t need any pre-baking and you can pour the filling right into it.

The cheesecake should be firm around the edges and slightly jiggly in the middle at 35 minutes, but everyone’s oven and baking experience may vary. If you aren’t sure of doneness, turn the heat off and leave it in the oven for another 5-10 minutes. If the edges appear brown (past golden) at all, remove it from the oven.

Chill for at least 2-3 hours or overnight before serving.

As someone that loves cheesecake, I was very skeptical of this substitution. I’ve made “yogurt cheese” spreads before by straining yogurt, but never thought to swap it out for the cream cheese in a recipe like this. But I have to admit that I’m impressed with the result. Still though, I don’t know if you can call it a cheesecake since we removed all the cheese! I’d be interested to see how this recipe would do if we strained the Greek yogurt to remove even more liquid. 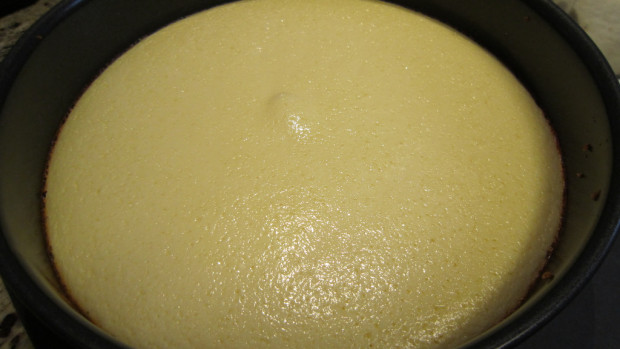 For when calories aren’t a consideration, I might try this with my usual cheesecake crust using ginger snaps or chocolate cookies. And I definitely advise lining the pan bottom and sides with parchment paper. Even though it’s fully baked and chilled, getting it to release from the pan wasn’t as easy as I’d hoped. There was some cake surgery after getting it into the plate.

It has a classic cheesecake flavor, though it’s a little bit more tangy than you might expect. And it doesn’t create a very “high-walled” cake since there are no rising ingredients. A recipe calculator estimates that 1 slice of this recipe’s cheesecake is about 230 calories vs about 400 on average for regular cheesecake, so that’s not too bad. Just remember that roughly half the calories doesn’t mean you can have twice as much! 😀 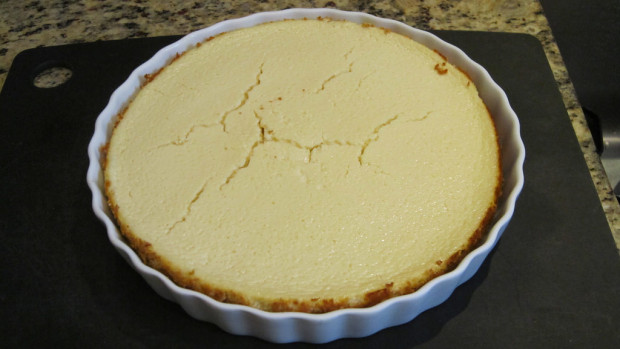 I’m definitely keeping this one in the dessert rotation. It’s easy to prepare and fast to bake. One variation I think I’ll try for next time is to maybe pare the recipe down and make individual cheesecakes in ramekins or muffin cups. It might also be fun to start with a Chobani flavored Greek yogurt for the base to see what that adds to the finished product. Pumpkin Spice Greek Yogurt Cheesecake, anyone?

For more Greek yogurt ideas, check out the recipes at Chobani’s website. You’ll find a lot more than just smoothies and dips!

It feels good to get back in the kitchen–with the camera–and bake. Here’s hoping I’ll have more culinary adventures in the near future!