Who’s that fat guy to the right of him? 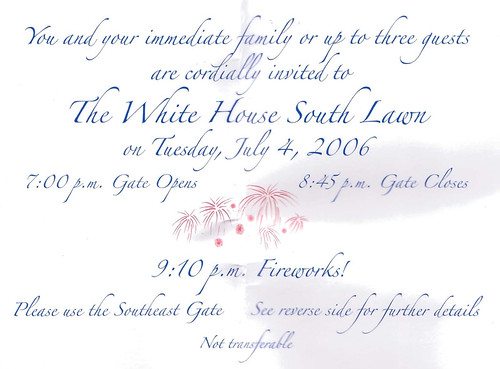 Turns out the “fat guy” we were looking at was Karl Rove. Jeezy Creezy, what a day. After the shopping/tourist/t-shirt early afternoon, I came home drenched in my own juices and sat around 1/2 naked just to dry out. All day long the streets were full of noise of cars and firecrackers. I got in a little City of Villains and finished up my iTunes project. My poor mac mini seems to crap out with iTunes, and I think it’s because I have so many songs in my library (over 101 gb) and the mini has such little memory. So I copied all the songs across the network into the PC’s iTunes library and on the PC’s hard drive, next will be removing them from the Mac’s library. I feel a little like a traitor, but only a little. Apple should have made a computer that I don’t need a freakin’ putty knife to open so I can replace memory myself and not pay someone ELSE to do it.

The 4th was all about the social plans, Everett had invited me to hang with them and do whatever they ended up doing, and later that day Richard called to let me know Dwight and Joe were doing something, but the winner was definitely Rhodes and the White House invite. We went to Thai Tanic at 6 for dinner, though with the rolling storms I wasn’t sure anything was going to go according to plan. One minute it’s dry, the next a total downpour, then after another minute it was gone again.

We were supposedly only allowed to bring a blanket, camera and ID with us, but I added an umbrella figuring they wouldn’t care about that. The rain kept away for the rest of the night, but I heard the suburbs got power outages in places and my co-worker had a tree fall on her fence from her neighbor’s yard. Oddly enough, when we got to the grounds, they didn’t check IDs at all, just searched bags and put us through the metal detectors. There were people walking around in period costumes, face painting, wandering illusionists, a puppet theater, a few bands — very “family entertainment.” Rhodes, Jesse, Richard and I were kinda blasé about the whole thing at first, “Oh yeah, it’s the White House, whatever.” But when we started walking around the grounds and realizing just how close we were to everything, it was pretty hard not to be totally into it all. Even as surrounded by privilege and power as I was, it was definitely cool.

It was like a huge block party, there were tons of people there and even though we picked a spot fairly close to the building, there was still a little fence and people on the ground level in deck chairs, then later on the really important people came out on the balcony and waved, but the lighting was pretty dim at that point so we really just had to assume that it really was Bush and his wife. Rhodes thought it might be a Bush decoy. We spotted Bush and wife, Cheney and wife, Karl Rove.. and really couldn’t make out who anyone else was.

The fireworks were awesome as usual, though I must admit the south lawn wasn’t the best vantage point. With the humidity, a lot of the smoke just hung in the air, and when the wave of smoke hit us it was like disgust from the fumes and nostalgia from the smell all rolled into one. But they played some music from previous year’s celebrations, Beyonce’s Star Spangled Banner, Celine’s God Bless America, and there were more people turning around snapping pics of the balcony guests than the fireworks. Oh.. they also sang happy birthday to George. I wasn’t so taken in by the spectacle that I was willing to do that, I’ll applaud the office, but not the man.

After it was all over, the mobs began the long walk to metro, bus, hotels, what have ya. Here’s where I get a little pissy… I’d braved the crowds from the White House to 15th and I, there was a huge line of people waiting for the bus and the first bus came, was full and kept driving right on past, no stopping to tell us anything about the frequency or another bus behind, nothing. So I kept walking, thinking I might find a cab, or eventually another bus would pass me that might be less crowded. I passed a lot of people, saw a lot of full cabs, and even passed cabs that were just sitting there, the drivers out and chatting and all saying the same thing, “we no working, try there, try there!” — and I kept walking. I made it to U St and still had no success cabs and from that point you really may as well keep going. I was texting people to keep me from going postal and from focusing on how much my feet hurt (because of the weather, I wore shoes I didn’t really care about, but they were not kind on the feet) and as I neared my neighborhood I realized that I hadn’t seen another bus pass me since that first one at 15th and I Sts. When I got inside, I saw that my walk had taken me about 40 mins or so but I was too pleased to be inside, air-conditioned and off my feet that writing a letter blasting Metro was the furthest thing from my mind.

After a few drunk dials from the Boy in Baltimore, I sat around reading a bit waiting for the fervor to die down and the local fireworks to stop, I got to bed around 12:30 I think. All in all, a fun holiday, and the last place I wanted to be today was the office… *sips his starbucks*